Caps the amount of damage that a creature can receive from a basic attack at 200 (210 - (10 * Rank)). This skill stacks with Block, and is negated by Bullseye.

4 and 5 star creatures can learn this skill.

This ability is boosted by the Frost Armor Rune, which deals damage to the attacking creature every time Frost Armor is activated.

4 and 5-Star Creatures can learn this skill through the Melding process after being evolved.

Note: Due to the new Skill Enhancement feature, Frost Armor can now be upgraded to level 15!

Additional Note: Even though it would make sense, Frost armor still cannot be leveled up beyond 10. This is expected to be patched at some point in the future, but may be intentional as not all skills have the ability to reach level 15. 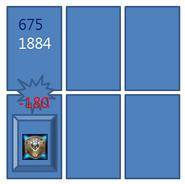 Add a photo to this gallery

Retrieved from "https://deck-heroes.fandom.com/wiki/Frost_Armor?oldid=26333"
Community content is available under CC-BY-SA unless otherwise noted.