Grants the creature with 10% (10% x Rank) protection from various magic attacks and instant removal skills, like Instakill, Retreat, and Disposal.

4 and 5 star creatures can learn this skill.

This ability is boosted by the Immunity Rune, which heals the creature every time it's Immunity activates.

Because of Immunity's strength for Melding, it is often a highly sought after skill.  Unfortunately, the creatures with a high-level Immunity are already some of the best Creatures in the game. Spider Queen is the exception, but acquiring her through the Remove Seal tool becomes increasingly expensive so be careful in choosing a target for her extremely valuable Immunity 9.

Immunity seems like a very simple spell but it is actually one of the most mathematically imbalanced and unique abilities in the game.  This is because the flat % protection that Immunity offers does not scale in the way that it appears at first glance, but scales exponentially.  Consider the following chart in imagining a situation in which your Creature has 1000 HP and Immunity n, who is fighting 1 Creature with Bolt 4 which does 100 damage.

Most game mechanics work on a scale that resembles a change in overall survivability, seen here as ΔSurvivability. Game mechanics designed this way will seem to "lose" potency as more armor or resistance is applied, sometimes mistakenly identified as diminishing returns. Unlike said mechanics which focus on Survivability and "real" power, Immunity is simply a flat protection from spells which ends up scaling extremely quickly.  In the case of Immunity, the result is by Immunity 5, a creature has 2x the survivability (related to spells) as a normal creature, and by Immunity 9 it will have 10x the survivability.

The reason this is allowed in Deck Heroes is because there are still alternate ways to kill creatures, and a Creature with a high Immunity should be focused with Physical Damage or Direct Damage in order to destroy them.  In this way, this skill is not technically overpowered, but it is important to understand how the scaling of this ability makes a significant difference between Immunity 7 and Immunity 9. 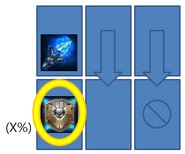 Add a photo to this gallery

Chances of Proc. X times in a row Edit

Simplified List of percentage chances to resist multiple times in a row Provided by ZebanHai.

NOTE : The original Post was Written by Antares at

So, Slapping an Spider Queen Immunity on a creature.

Electro can never ever hit Hellow World with his Bolt. Nuh-uh.

Now this is Spider Queen Immunity.

The first time Bolt triggers, 90%. There's only a 10% chance of Hello world getting hit, and 5% of Paralyze.

However, let's imagine if that bolt hit twice in a row.

What if Bolt hit three times in a row?

Let's assume A flame brave was hitting a Spider Queen. According to what we discussed, Flame brave having 3 magic skills, the chance of spider queen Proc. Immunity to all 3 is 72.9%, NOT 90%

By the time Flame brave attacks Spider queen a third time (9 magic skills), Spider queen blocking all 9 magic is NOT 90, it's a mere 39%.

Don't trust your Immunity that much

Even with spider queen Immunity, the chances of it Proc. 10 times in a row is... miserable.

With horned beast, I doubt she will ever withstand 10 magic in a row.

Retrieved from "https://deck-heroes.fandom.com/wiki/Immunity?oldid=30149"
Community content is available under CC-BY-SA unless otherwise noted.